Do I Have a Bruised Toenail or an Infection?

A discolored toenail is going to be a cause for concern. Whatever might be going on underneath the nail, probably isn’t good news!

There are a variety of conditions that can lead to toenail discoloration. Let’s examine a few of them here.

Two common causes of discolored nails that are often confused are fungal toenails and bruised toenails. We’ll discuss each diagnosis, what it looks like, and how to tell if you might have it. 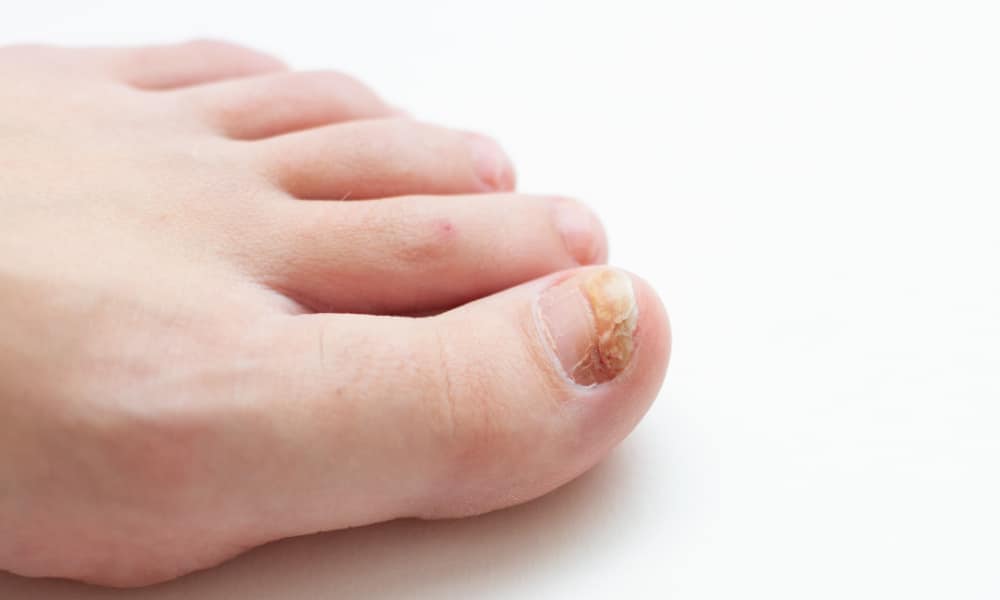 Fungal toenail infections are caused by dermatophyte fungi, a group of microorganisms that survive by breaking down keratin, a hard protein abundant in nails (as well as hair and skin). If they find a way underneath the nail, they’ll grow quickly and start to alter its appearance.

Fungal toenails are typically yellowish or brownish in color, although they often begin as a small, whitish dot near the tip of the nail before the infection spreads. Fungal infections often cause other nail symptoms too, including:

You might have fungal toenails if, in addition to any of the above symptoms, you have a history of athlete’s foot or skin rashes. These can be caused by the same group of fungi and spread to one another.

Dermatophytes can also spread through indirect contact, and they like warm, wet places such as gyms, locker rooms, and pools. If you’ve gone barefoot in public places such as these, you may have been exposed.

What’s the prognosis and treatment?

Although fungal toenails usually aren’t dangerous to your health and typically are not painful, they will not go away on their own. The nail plate provides them with a limitless supply of keratin, as well as a (natural) protective barrier against topical antifungal cremes.

The best solution for most patients is laser therapy, an advanced treatment that uses light energy to kill the fungus from the outside in without damaging your healthy cells, taking any medications, or requiring removal of the nail. If you have this condition, it means you’ve either bruised the skin underneath the nail, or suffered a laceration that’s causing blood to leak and pool there.

In addition to discoloration, you could suspect a bruised toenail (subungual hematoma) if you’ve recently suffered an obvious injury to the toe, such as dropping a heavy object on it.

However, there does not need to be specific trauma associated with the condition. Bruised toenails can also be the result of extended overuse or irritation. For example, people who play in shoes that are too tight might develop a bruised toenail slowly over time.

What’s the prognosis and treatment?

This depends on the cause and severity of the bruise or laceration. Minor bruised toenails may often heal on their own, with the discolored part of the nail slowly growing out. In more serious cases the nail may fall off.

In general, we recommend giving our office a call so we can evaluate your condition and determine the best approach to heal the injury. This may involve drilling a small hole in the nail to drain built-up fluid and reduce pressure. More extensive treatments may involve a healing a fractured bone or open wound to prevent infection.

Getting the correct diagnosis is crucial if you want to treat the problem properly and get your healthy nail back!

Are There Other Possible Causes of Discolored Toenails?

The most serious possible cause is subungual melanoma. This is a form of skin cancer, and while it’s rare, it can develop in the nail bed, where it appears as a black spot or streak. Subungual melanoma may not be an especially aggressive form of cancer, but can often be deadly since many people don’t realize they have it until it has progressed too far. The survival rates are very good if you do catch it early, however.

If you have black spots under your nail, especially if there’s no obvious cause, and it isn’t “growing out,” don’t take chances—please contact us right away.

Concerned About Your Toenail?

At Sierra Foot & Ankle, we have extensive experience dealing with all kinds of painful, unsightly, and frustrating toenail problems. While many cases are relatively simple to diagnose and straightforward to treat, it’s extremely important to identify and address serious toenail problems as early as possible.

Whatever might be causing your toenail discoloration, we’ll find out what it is and make sure you get the effective treatment you deserve. Call our office in Carson City at (775) 783-8037, or contact us online to request an appointment.